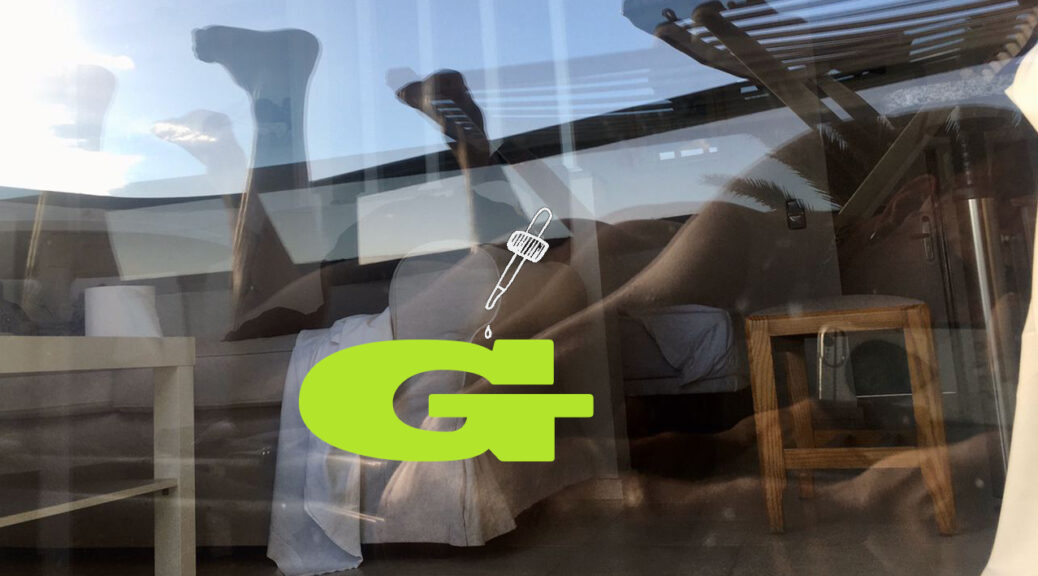 Using G (GHB/GBL) poses particular risks and challenges: It is necessary that we discuss it more and more openly! This text introduces a series of articles about G. By doing so, we intend to contribute to minimising the harm associated with its use and helping to prevent overdoses – and thus G emergencies. We want to provide knowledge to users and (non-consuming) relatives/friends* and give space to the perspectives of everybody. The social dimensions of G-consumption should also be discussed.

Gamma-hydroxybutyric acid and its salt are traded on the black market as GHB and gamma-butyrolactone as GBL. Street names for both substances include G (pronounced “jie”), liquid or liquid ecstasy. However, GHB and GBL are not chemically related to MDMA (= main active substance in ecstasy tablets) and have a different effect.

GHB is a chemical messenger produced naturally in the body that regulates waking/sleeping states in the brain and stimulates growth; synthetic GHB is therefore also used for doping. In medicine, it is used as? treatment of narcolepsy, among other things. It is usually available as a colourless liquid in small bottles, more rarely as a white to yellowish powder. It has a very salty to soapy taste and a slightly sticky smell.

GBL is converted to GHB in the body and therefore has the same effect, but is faster and stronger than GHB. GBL is the main component of some industrial solvents (e.g. graffiti removers) and has a chemical, rubbery, slightly acidic taste.

Both substances are mixed into a drink (without alcohol) and drunk. As a strong acid, GBL must be well diluted before drinking, otherwise burns will occur.

BDO [1,4-butanediol] is also occasionally consumed, a colourless liquid softener that is also converted to GHB in the body, but is stronger.

The effect varies according to the set of each person (habituation effects, mental and physical condition), setting (general conditions of consumption) as well as the content, composition and quantity of the active ingredient and the degree of purity.

Dosage: GHB and GBL are already effective in small doses. The gap between an effective and a narcotic dose is extremely small for both GHB and GBL, overdoses are very easily possible. Regular consumption leads to a rapid development of tolerance (more and more of the substance is needed to achieve the same effect).

*These dosage details refer to a person weighing about 70 kg.

Effect spectrum: Low doses have stimulating and mood-lifting effects. Users* describe that consumption can increase the need to get closer to other people on an emotional, intellectual and/or sexual level.

Higher doses lead to consciousness-limiting/strongly soporific effects. The transition between these effects is not smooth, but can be described as an “on/off principle” with sudden falling asleep and highly frightening waking up.

Possible side effects of GHB/GBL

If one or more of these symptoms occur – call the ambulance immediately (emergency call: 112)!

after consuming GHB/GBL: various after-effects (headaches, drowsiness, memory disorders) may occur, but don’t have to. After consumption over a longer period of time: sleep disorders, anxiety and trembling may be triggered and depressive states may be promoted or intensified.
There is also a risk of (strong) physical and psychological dependence.

If someone becomes physically accustomed to the drug, which can begin after only a few days of continuous use, the following (possibly life-threatening) withdrawal symptoms are possible when the substance use is discontinued spontaneously: insomnia, sweating, trembling, inner restlessness, anxiety and aggressiveness, muscle cramps, seizures. The symptoms can last from a few days to several weeks. Slow down dosage – if possible under medical supervision – is recommended.

There are indications that frequent use and especially GHB comas could have a negative effect on cognitive abilities, feelings or memory performance. (Source: https://www.eurekalert.org/pub_releases/2018-10/econ-rsc100518.php)

GHB has a very short half-life (20 – 45 min) and is completely metabolised in the liver to carbon dioxide and water. It can therefore only be detected for a short period of time and with complex procedures. After the last intake: up to 6h in blood / up to 12h in urine

Current rapid drug tests do not yet test for GHB/GBL. Multiple consumption is detectable in the hair.

In principle, the following applies: risks are higher with mixed consumption than with mono-consumption; the body and psyche are subjected to greater stress. Specific substance effects can be strengthened or weakened. Quite unexpected, possibly life-threatening effects may also occur that do not correspond to the sum of the specific effects. Since the effects of the respective substances can occur at different times and last for different lengths of time, interactions can occur with a time delay.

GHB/GBL + alcohol or other downer: life-threatening combination. A fast onset of coma-like deep sleep with slowed breathing or respiratory arrest as well as nausea and vomiting are possible.
GHB/GBL + speed, ecstasy or other upper: greatly increased cardiovascular stress. The effect of GHB/GBL is temporarily suppressed – risk of GHB/GBL overdose!
GHB/GBL + ketamine: the effect spectra are very different (increase or decrease of physical sensitivity), combination is often described as unpleasant. The risk of respiratory arrest is increased.
GHB/GBL + Viagra: can lead to a (life) dangerous drop in blood pressure in the brain, heart and lungs – circulatory collapse!

You can find information on other combinations at drugscouts.de.

There is no such thing as risk-free consumption! The application of safer-use rules can help to minimise risks:

The application of safer-use rules can help to minimise risks: (Very) young people are not advised to consume GHB/GBL. Early consumption increases the risk of developmental impairments or persistent after- and side effects.

People with epilepsy, heart or kidney dysfunction, mental instability or mental illness are not advised to use GHB/GBL because the likelihood of symptoms worsening is increased.

GBL is sometimes traded on the black market as “GHB”. For inexperienced users* the substances are hardly distinguishable. Pay attention to what and from whom you buy and ask what you get. If possible, put a few drops of the liquid on styrofoam/coloured lacquer/thermal paper. GBL decomposes these substances, GHB does not.

Don’t let yourself be persuaded to consume it. Decide for yourself whether you really want to consume or not. Take GHB/GBL only in a comfortable environment and when you feel good. Consume only where you can sit or lie down, because side effects such as balance problems, unconsciousness, coma can occur. Make sure that there is someone close to you who knows about it and can help you.

Often you do not know about the amount of active ingredients and any additional substances contained in the product. Furthermore, the range between “tolerated” dose and overdose is very small. It is therefore necessary to adjust the dose to your body weight and to measure consumption units as accurately as possible! GBL must be dosed lower than GHB! Suitable are 1ml syringes (e.g. tuberculin syringes) or fine pipettes made of glass available in pharmacies. Since GBL is a solvent, the label and rubber seal wear off quickly.

On an empty stomach, reduce dosage. Do not consume GBL with dairy products: severe nausea and vomiting possible.

Mix GHB with liquid (no alcohol!) before consumption. Dilute GBL strongly – at least in a mixing ratio of 1:100, better 1:300 (e.g. 1 ml GBL and 100 or 300 ml juice) to reduce caustic/irritating effects. Stir the drink before consumption as GBL settles on the bottom. Do not pour GBL undiluted into the mouth – risk of burns!

If you have mixed a drink with GHB/GBL, do not leave it unattended so that other people do not drink from it by mistake.

If you get GBL on your skin, wash the area thoroughly with soap and water.   Even if you no longer feel any effect after the intoxication has subsided, there may still be active ingredient in your blood. It is often difficult to estimate how much time has passed since you last used GBL. To avoid an overdose, note the time of the last use, take a screenshot of the time or start the stopwatch on your smartphone. Wait at least 2 hours and dose lower when refilling.

GHB/GBL can have a disinhibiting effect, you may be more willing to engage in (sexual) adventures. Therefore, think about what, how much and with whom you want to consume or do something. If the consumption has a sexually stimulating effect, the risks of unprotected intercourse may not be taken so seriously. Body fluids can contain sexually transmitted pathogens, condoms and oral protection cloths protect against HIV and other infections. If you know that you will be assaulted under the influence of GHB/GBL or that you are no longer aware of other people’s defensive behaviour, stop using or stay away from people.

GHB/GBL consumption can leave you in a stunned, helpless state. Pay attention to with whom you are spending time with. If you notice that someone wants to take advantage of your helpless condition, take action or get help.

Bracelets are available that react to GHB by changing colour. You can use these to determine if GHB is in your glass. These bracelets do not test for GBL. There is therefore no absolute certainty.

If someone has fallen asleep on GHB/GBL, does not react, notice other symptoms of overdose (see above) or feel overwhelmed by the situation – call the emergency doctor: 112! Until the doctor arrives: Stay with the person, check his or her breathing regularly, put the person in a stable lateral position and make sure that he or she cannot hurt himself or herself; in case of nausea and vomiting: clear the oral cavity – danger of suffocation! In case of respiratory arrest: perform cardiopulmonary resuscitation! For further information, see “Chemsex First aid” (also as pdf).

Make sure that the consumption of GHB/GBL does not become a habit or determine your everyday life. You can find information on this in the leaflet “Consumption reflection” (text only available in German language). If you want to change/stop using GHB/GBL or have any questions, don’t hesitate to contact the institution of your choice!

It is unclear whether or to what extent GHB/GBL can influence the menstrual cycle. Pregnancy is also possible in the absence of menstruation or if periods are irregular. GHB/GBL could also reduce the contraceptive effect of the birth control pill. Consumption of GHB/GBL can lead to vomiting. If this occurs up to 4 hours after taking the contraceptive pill, too little of the active substance of the pill may enter the bloodstream, so that pregnancy is possible.

THEREFORE: protect yourself from an unwanted pregnancy with condoms or other non-hormonal contraceptives!

The substances can be harmful to the unborn baby/newborn child! To avoid the risks, do not consume GHB/GBL during pregnancy and breast feeding.

This information is not an instruction or motivation to use drugs!

GHB is listed in Annex III of the German Narcotics Act (BtMG) as a substance that can be marketed and prescribed: Unauthorized possession, acquisition and trade are punishable!

GBL is not listed in the BtMG, but voluntary control of the release by the distribution companies is relied upon (monitoring, e.g. when purchasing larger quantities). Possession of GBL is not punishable, but is regulated by the Chemicals Act and the Ordinance on Hazardous Substances (GefStoffV). If GBL is intended for use on humans and animals, it is subject to the German Medicines Act (AMG). According to this law, it is an offence to make GHB from GBL and to dispense or sell GBL for consumption.

This text has been written to the best of our knowledge and belief. Nevertheless, errors cannot be excluded. The Drug Scouts do not accept any liability for damages resulting from any kind of use of the information contained in this text.

Reprint of the text with permission of the Drug Scouts Leipzig. The original text was published here: https://drugscouts.de/de/lexikon/ghb

© 2020. Drug Scouts and Love Lazers 2020, all rights for the article reserved by Love Lazers and for the substance information by Drug Scouts. cover photo by trixi. vintage photo collage by diashi. pipetta gif found by AS90.