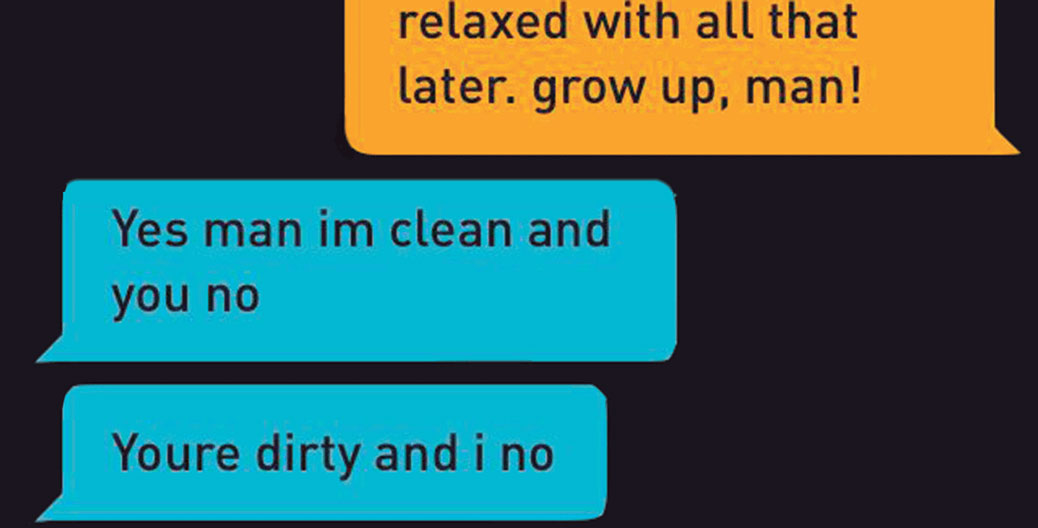 Documentation of a real Grindr chat from May 2018. The screenshot was shown and discussed at the Love Lazers exhibition in the queer Art Space El Parche in Bogotá (Colombia) 22nd of May.

(see commentary below the picture).

Most people have no idea  …

… about the daily reality of discrimination and how that feels to HIV-positive people. It leaves them speechless and it hurts. It conveys the feeling of being less loved and more alone. Most non-infected people simply don’t understand that. But that’s exactly what happens and it happens every day. We want to have more discussion about these disparaging experiences.

To negotiate what safer sex means to us, we must have the ability and willingness to perceive the feelings, thoughts and motives of our counterpart. We need to develop understanding and sympathy for that other side. “What is safe for us?” can only be discussed if the perspective of (potentially) HIV-positive people is taken into consideration at all times. Their positive visibility, self-confidence and positive images (role models) are important, but not nearly sufficient for this.

The Grindr chat posted here was the topic of a roundtable discussion that was actually about PrEP. It caused shame, anger and consternation that such a thing can happen.

Imagine this chat as the tip of an iceberg, a single conversation that was particularly violent and offensive. However, it raises the question of how many chats are silently terminated and left without comment (or never started)? How often are people marginalized in cruising apps in a quieter, “polite”, invisibly way? – Because someone has openly stated “hiv positive” in her or his profile. Because he or she revealed in the chat that they’re positive. Or perhaps simply because condoms or PrEP were given as the preferred protective measure. Also, the prejudices against “too” feminine types, trans people, elders and people with different looks or cultures (the list can be continued) are prevalent.

All of this is not just a side effect of our communication, it is an expression of how many of us live their lives today. It’s what we have learned: a life based on demarcations that become pejorative exclusions.

It’s 2018 and rejection, refusal, exclusions are still becoming far too commonplace! Refusing to be silent about it means not accepting it any longer.

A good read: Two Sides of the Same Bed